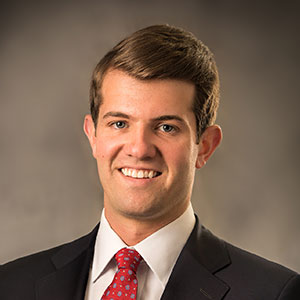 Jack Logan joined the firm in 2018 as an associate. His primary practice areas include civil litigation and business law. Prior to joining the firm, Jack graduated from the University of Kansas School of Law. As a first-year law student, Jack received the Payne & Jones Award for Appellate Advocacy for highest scores in oral argument. He worked as a judicial intern for the Honorable Carlos Murguia of the United States District Court of Kansas and as a civil litigation law clerk for the Office of Kansas Attorney General Derek Schmidt. During his time with the Attorney General, Jack prepared motions and pleadings defending the State of Kansas, its agencies and officers under the Kansas Tort Claims Act in both federal and state courts.

Jack brings a unique understanding of public policy to his practice of law. Before law school, he worked in government relations coordinating public policy agendas on behalf of businesses engaged in state and federal legislative advocacy. During law school, his work on K-12 public school finance was submitted to the Kansas legislature and he later conducted legal research on a broad range of issues in the Kansas Senate. He was the recipient of a CALI Excellence for the Future Award in Legislative Study during his final year of law school.

Jack grew up a few blocks from the firm’s offices. He went to elementary school across the street and attended middle school next door. Today, he feels fortunate to “come home” for work each morning. Jack and his wife, Ellie, live in Kansas City, Missouri.